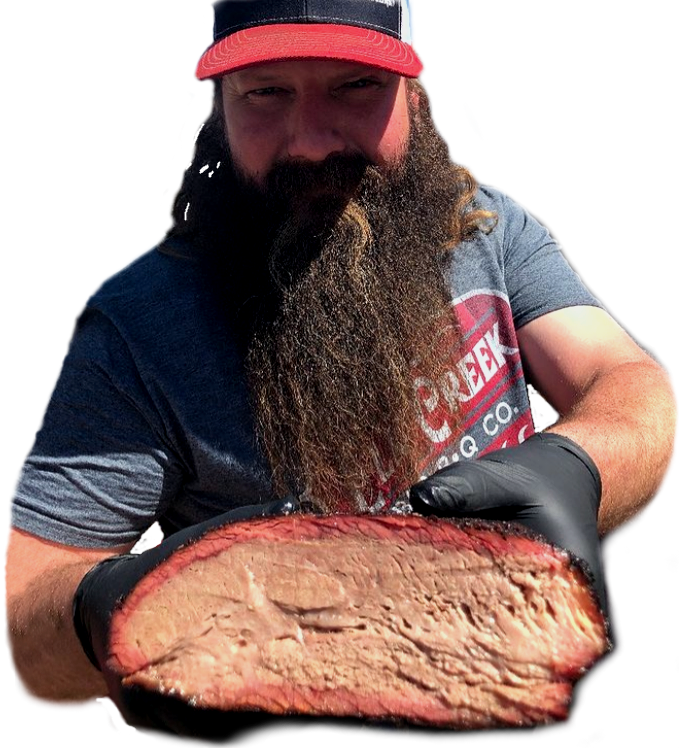 I've always been one of those do it yourself types, and always beef around cooking my whole life everything we made was home grown and made from scratch or built from the ground up by us . I was machinist and a welder by trade. I had gone to work for a guy that had lots of pipe laying around and wanted to build a pit like my dad and uncle had cooked BBQ for the family growing up, I asked and he said go for it. So I built an " Over and Under' style pit and started cooking up BBQ .. this cooked great!

I never could find a "store bought " rub that I liked so I started playing around with mixing spices for BBQ writing things down and measuring everything, this rub was a hit, and everyone liked it. So I decided to enter a non-sanctioned contest here locally at the Cheyenne- Arapaho old settlers reunion in Hammond Oklahoma one weekend back in 2007, ended up taking 1st and 2nd and a 3rd place out of 15-20 teams and won the show!

So I then went on to cook my style of BBQ at a Sanctioned comp in Pampa TX, and took a First place people’s choice and a first place Rib for a reserve grand champ and that Qualified us for The World Championship in Meridian, went down there and didn't do bad at all out of 125 teams we took 24th , In later years I went back and finished top ten in brisket !

At this point things were really heating up for me. I was going nearly every weekend cooking contests and Friday night steak jackpots and winning lots of awards doing it. I knew at this point I had something special on my hands and formed an LLC to start selling my blends and get them made on a larger scale at a real facility in OKC.

Since then we have Qualified for the American Royal World Series of BBQ every year, Also have Qualified and been to the World SCA at Billy bob’s twice after winning a few steak cooks!

I started selling local at the butcher shops and grill stores slowly adding on new blends and letting other cooks use them to field test which I still do sponsoring 12-15 teams annually from coast to coast, I don’t compete much anymore as it’s gone into a full blown business an I am in close to 100 stores here in the USA, we have stores in Mexico, Canada, Australia and New Zealand. I spent two weeks in AU spring 2019 and attended Meatstock in Sydney, the team I sponsor there won Team of the year also!